This is the default archive.php template

Dig That Gig: Brian Korte by Paul Spicer Originally posted on Richmond.com, September 20, 2010   Brick by brick, Brian Korte has created a gig unlike any other in the River City. He has built his enterprise on the classic 2×4 LEGO brick. One of the country’s few brick artists, Korte works not with a… continue »

The Tartan: Brickworkz Originally Posted: November 3, 2009  by Dayna Lester It’s amazing what a simple childhood passion can do for your career. Just ask Brian Korte. He is a pro at playing with Lego’s. Well, not so much playing as designing. Brian Korte, founder and owner of Brickworkz, LLC, designs and builds Lego mosaics…. continue »

[Radford University Alumni Newsletter] September 10, 2009 January 1, 2010 at 8:13 PM It all begins with an idea. The inspiration can come from a photograph or a piece of art. Sometimes the idea is generated from someone else; someone who is seeking to set a Guinness World Record for the world’s largest LEGO image…. continue » 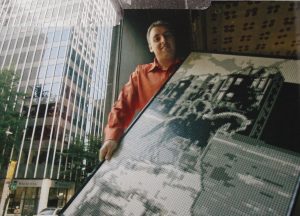 A love of Lego has given Brian Korte a storefront gallery in downtown Richmond to showcase his mosaics made from the multi-colored bricks. JEFFREY KELLEY TIMES-DISPATCH STAFF WRITER Oct 31, 2007 And now one of his images might land him in the Guinness World Records. Korte, a 29-year-old from Henrico County who runs Brickworkz, has… continue »