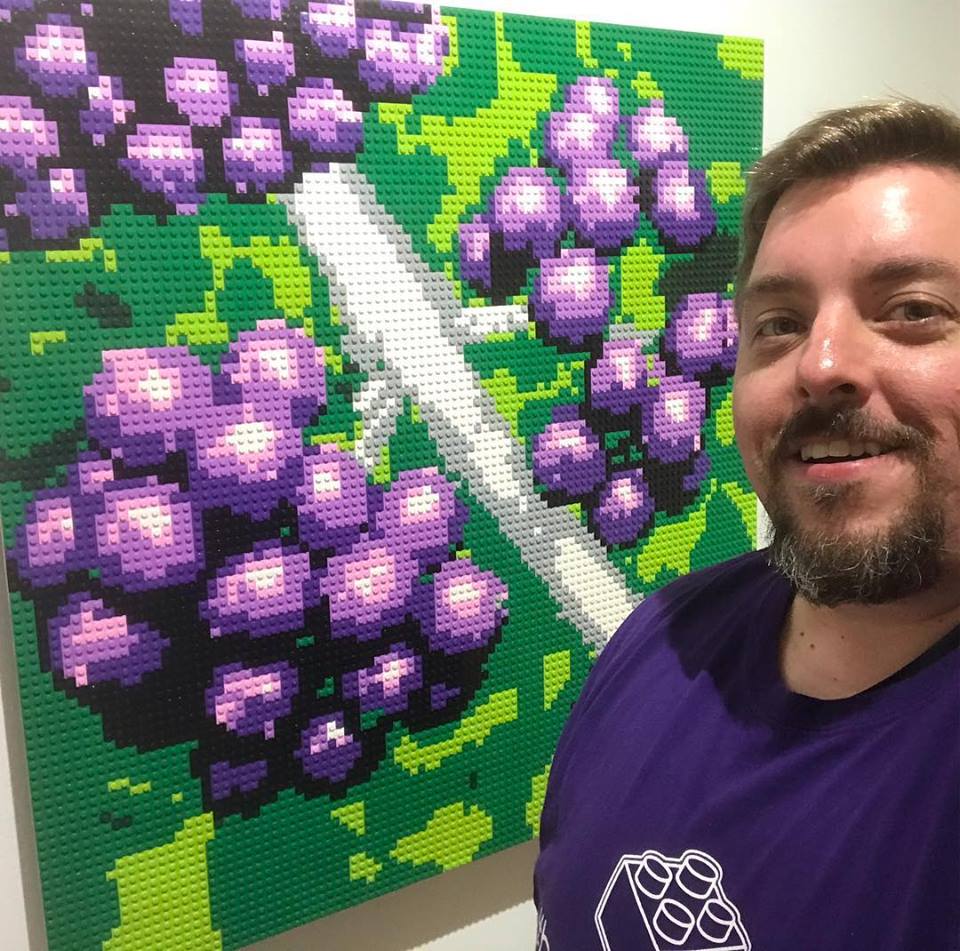 LEGO, those classic building-block toys that you’ll really regret stepping on, have become quite the topic in the past few years, especially when it was recently revealed that LEGO sets are a more profitable investment than gold. However, for artist Brian Korte, LEGO bricks are neither a toy nor an investment — they’re art.
With Korte’s current exhibit, Vibrance, on display until May 12 at the Cultural Arts Center in Glen Allen, he has brought together works that showcase his talent for turning a common children’s toy into mosaic masterpieces that resemble stained glass. Visitors can expect to see recreations of famous paintings like “Madonna and Child,” which is being shown with bright lights cascading through to accentuate its immense detail, as well as portraits that have taken on a special task within the community.
This is not Korte’s first appearance at the Cultural Arts Center, and the center is very glad to have him back.
“Brian’s first exhibit with us was so exciting, and the reactions to his unique take on LEGO art were huge,” said Lauren Hall, Visual Arts Manager for the Cultural Arts Center. “We knew we had to make this a regular exhibit.”
For Hall and the Cultural Arts Center, Korte’s unusual approach to art is a big part of the appeal. “He is so passionate about what he does, and he is always looking at how to use LEGO differently, to create new ideas and designs,” said Hall. “Working with him over the past few years, we have had the pleasure of seeing the evolution of his creative process.”
Visitors to Vibrance will have the opportunity to witness Korte’s creative process themselves; QR codes posted next to the pieces allow people to go beyond the finished creations and watch time-lapse videos showing how the art came to be.
“Those [pieces] with videos received a great deal more ‘ooohs’ and ‘ahhhs’, because they could see the piece coming together,” said Korte. “I think watching the process made the art more real to them.”
That carefully constructed process has come to Korte in pieces throughout his life, starting when his older brother grew out of his LEGO phase and passed his collection down. From that point on, Korte was hooked. However, he didn’t start working with LEGO to make art until much later on.
“I was at 23 and working as a webmaster by day, and took out my old cross-stitching kit from my youth,” said Korte. “I began making my own stitching patterns and decided to apply the same techniques with LEGO bricks.” The challenges of attempting to create patterns with LEGO was one he found invigorating.
“Unlike the colored threads at a local hobby shop that numbered in the thousands, I’d have about 14 colors attainable at any modest quantity with which to work,” he said. “That would become my creative challenge — to create photographic likeness using a limited color palette.”
For Korte, the individual bricks gave his creations a mosaic-like quality. “Making every ‘pixel’ matter in a mosaic — essentially 4 dots per inch — was another creative challenge.”

Since 2016, Korte has worked solely on his LEGO projects through his company, Brickworkz. However, it hasn’t always been this way. He began making LEGO art in 2004, working on it in his free time while paying the bills with IT contract work. Eventually he felt ready enough to make a go of it as a business.

“I took three months off to build a dozen sample portraits, create a website and marketing materials, and get the word out,” he said. “I grew it slowly deliberately, to refine the process — making things more efficient, learning what worked and what didn’t,” said Korte.
By 2016, he was doing enough business to quit his day job and devote himself full-time to Brickworkz. And he couldn’t be happier to do so. “Working with LEGO is amazing,” he said. “I joke often that mine is every 7-year-old’s dream job, and it was for me too.”
Vibrance documents Korte’s artistic growth from his beginnings, in which he primarily worked with grayscale LEGO bricks, to his current brightly-colored pieces. “I made the focus almost entirely color mosaics as an emergence from my start,” he said. “When LEGO discontinued the shades of gray I used, I worked with my remaining inventory, and made a change to the bright, vibrant colors we all know and love.”
Korte also intends the show to be autobiographical; the bright colors of the LEGO bricks make a subtle statement about his life. As he explained, “I enjoy standing out from the norm and not really going with the flow.”
Vibrance is showing through May 12th in the Gumenick Family Gallery at the Cultural Arts Center in Glen Allen. For more info, click here.
(Originally Posted March 28, 2019 at:
https://rvamag.com/art/brian-korte-builds-beautiful-art-one-brick-at-a-time.html)