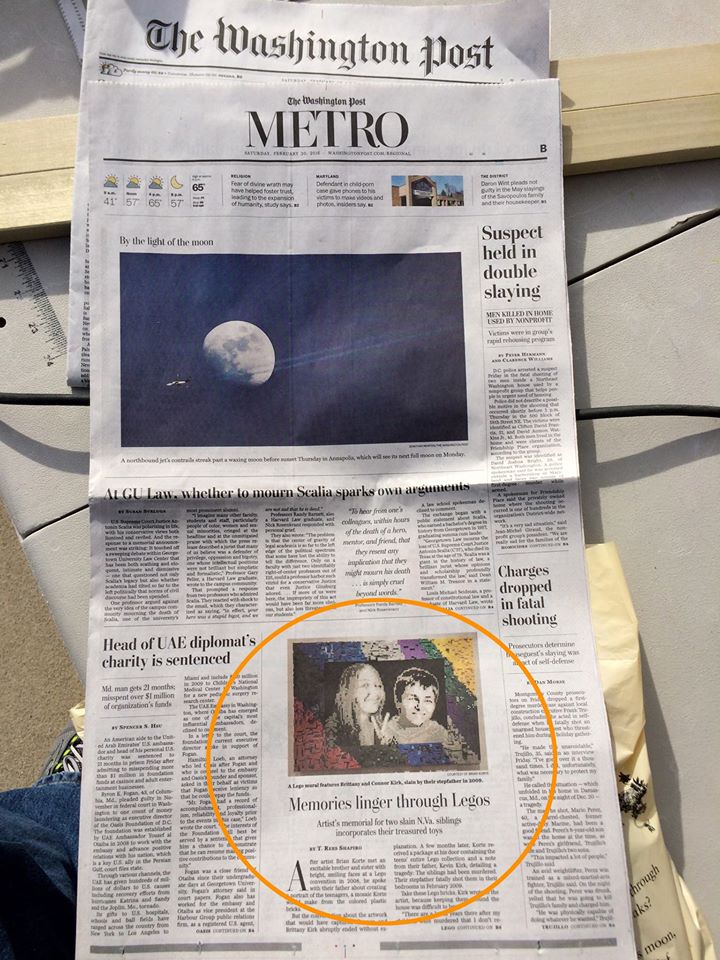 After artist Brian Korte met an excitable brother and sister with bright, smiling faces at a Lego convention in 2008, he spoke with their father about creating a portrait of the teenagers, a mosaic Korte would make from the colored plastic bricks.
But the conversation about the artwork that would have captured Connor and Brittany Kirk abruptly ended without explanation. A few months later, Korte received a package at his door containing the teens’ entire Lego collection and a note from their father, Kevin Kirk, detailing a tragedy: The siblings had been murdered. Their stepfather fatally shot them in their bedrooms in February 2009.
Take these Lego bricks, Kirk wrote to the artist, because keeping them around the house was difficult to bear.
“There are a lot of years there after my children were murdered that I don’t remember,” Kevin Kirk said. “I was completely numb.”
Now Korte is honoring his family’s memory with a Lego portrait of Connor, 13, and Brittany, 14, made of the bricks from their own toy collection. The mosaic is part of a featured exhibit of Korte’s work in Glen Allen, Va., north of Richmond.
“I was completely devastated,” Korte said. “That kind of violence towards children just sets me off.”
Korte at first felt sadness for Kevin Kirk, then anger. Finally, Korte said, he welled with pride, knowing that the family had decided to give him the things the two children treasured.
“It’s such a privilege to have someone trust their Legos for this,” Korte said. “I’m sure it’s going to go a long way in keeping their memory alive in a healthy, creative way.”
Kirk said that the mosaic has helped ease his pain and will help keep his kids’ legacies alive.
“This will let people know, ‘Hey, things can be okay when things like this happen,’ ” Kirk said. “It’s a little bit of closure for me. It’s doing me so much good to know that so many people care.”
Korte’s own obsession with Legos began as a child, when he dedicated hours to building elaborate medieval-castle scenes. As an adult, he continued to tinker with Lego projects in his free time.
Since 2004, when he launched his Brickworkz portraits business, he has created more than 200 Lego mosaics that now adorn such places as the halls of a royal palace in Bahrain and the corporate offices of Air­bnb in Copenhagen.
But the portrait that has touched him most profoundly is the 12,000-piece Lego mosaic of Connor and Brittany, Korte said.
“It almost has a spiritual feel to it,” Korte said, noting that pieces from the siblings’ Lego collection were used in the colorful border of the solemn grayscale portrait of the children, whose lives were cut short that winter night in 2009.
Carrillo Dean, a 23-year veteran Prince William County park ranger, returned home to Triangle, Va., that night from a typical eight-hour shift to find his stepchildren and his wife, Elizabeth, arguing about Connor’s unfinished Bible study and Brittany’s math homework.
When Dean headed to bed, he got into an argument with his wife.
“He said he just snapped,” a detective later testified in court. “He just couldn’t take it anymore.”
Dean grabbed a .45-caliber handgun and shot his wife in the head before shooting her children — Connor as he slept in his bed, and then Brittany, who woke up after hearing the gun blasts.
Elizabeth Dean and Connor Kirk died at the scene. Brittany Kirk was airlifted to a hospital, where she succumbed to her wounds the next morning.
“My daughter died in my arms in the hospital,” Kirk said.
When police arrived at the house after 10:45 p.m., according to court testimony, Dean turned around and told the officers, “Just cuff me.”
He then told police: “It’s too late. They’re all dead. I killed them all.”
Dean pleaded guilty and received three life sentences, which he is serving at a state prison in Sussex County, Va.
Korte decided to unveil the Lego portrait on the seventh anniversary of the siblings’ deaths, along with an exhibit memorializing other children who died young.
“It was emotional,” said Korte, who has three children, ages 1, 4 and 5.
Kirk said he is still recovering from the loss of his children. Even a trip to Luray Caverns or a vacation to the beach can send him reeling.
“Every moment of the day, it’s always there. It’s always there in the back of my mind no matter what I do,” Kirk said.
Kirk said the Lego mosaic will help share Connor’s and Brittany’s story.
“I’m getting over this,” Kirk said. “People like Brian have helped me.”