A Memorial of Echo 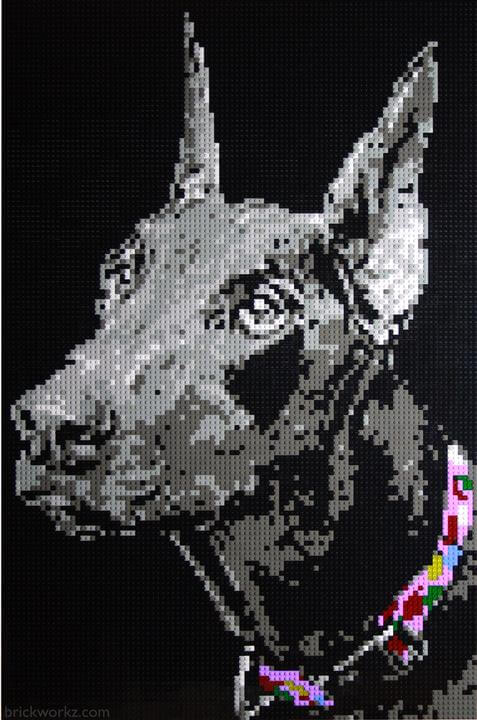 Sometimes we get requests from fellow LEGO enthusiasts who have brilliant ideas for a LEGO mosaic portrait but want either a second opinion or some additional information. We love to work with other Adult Fans of LEGO (AFOL) and collaborate on LEGO portraits. Such was the case with “Echo.”

Our customer had already drafted up a rendition of his Doberman Pinscher, “Echo,” and wanted to see if I could build it either from his specifications, or perhaps re-work it to make it into the best portrait it could be.

We reviewed several of their favorite photos of Echo, their first family Doberman Pinscher. After seeing one photo that was a bit more horizontal, I discovered a great way to capture Echo’s memory by focusing mostly on her facial features.

From there, we determined that this would look the best as a gray-scale portrait with subtle color highlights. This became the “Echo” mosaic pictured here, a highly-detailed LEGO portrait of their cherished Doberman.

From our customer: “Brian, we unpacked it last night. It looks fantastic. [My wife] absolutely loves it. It is displayed proudly above our fireplace. Thank you.”

My recommendation was to create a vertically-oriented portrait with Echo’s face cropped just at the collar. We included the collar to give the portrait just a pop of color too. The build was captured in time-lapse video which you can see below: