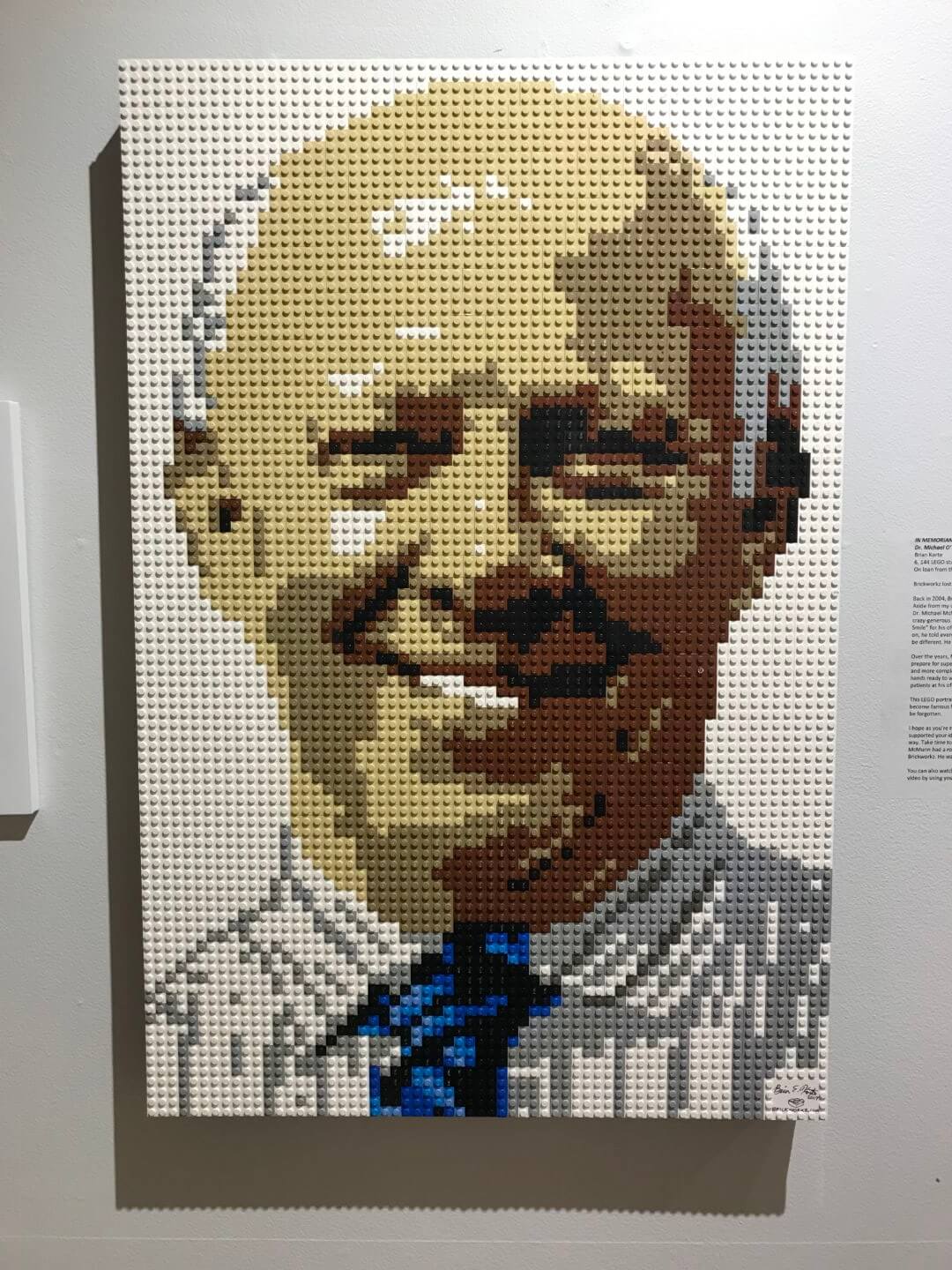 Brickworkz lost one of its greatest cheerleaders.

Back in 2004, Brickworkz began on a little folding table in my one-bedroom apartment. Aside from my own family in those very early days, I had another fan. It was my dentist, Dr. Michael McMunn. Mike was a special blend of crazy-smart, crazy-enthusiastic, and crazy-generous. It was his generosity that sparked the idea to commission “The Perfect Smile” for his office in Richmond, Virginia, as my first paying customer. From that point on, he told everyone about Brickworkz and his dental patient, Brian Korte, who dared to be different. He believed in me.

Over the years, Mike would stay up late with me and even work weekends to help me prepare for super-tight deadline projects. As the years went on, the LEGO gigs got larger and more complex. Mike was always there with encouragement or at my door with hands ready to work. This was usually after he worked through a full day’s worth of patients at his office.

This LEGO portrait now joins the multitude of Memorial pieces that Brickworkz has become famous for. Mike’s support for me and my endeavors with Brickworkz will never be forgotten.

I hope as you’re reading this, that you can think about a person in your life who has supported your ideas and given you encouragement every step of the way. Take time to tell them what they mean to you. Dr. Michael McMunn had a role like that in my life from the very beginnings of Brickworkz. He was a man who truly knew how to live and play well.

My girls were helping me put the final pieces together on the Lego portrait of Mike McMunn one evening in Febrauary. We wouldn’t know until later that he was dying just 20 miles away.

It is often said that “time heals all wounds.” For those of us who have lost someone special, we all know that time helps to lessen the shock but the pain of the loss of someone like Mike will take far longer than the year we’ve had to process. It’s bitter-sweet now, which I suppose is an improvement. (It was just plain bitter for so long.) But now the sweetness of perspective has kicked-in and we get to think about Mike in so many positive ways.

One example of perspective we learned from his passing is to always tell your loved ones what they mean to you. We don’t always get to say goodbye when or how we want. It’s not like the movies.

Perspective helped us realize the fullness of his life. To his children/in-laws, he was more than a Dad. To his patients, he was more than a dentist. Academics, colleagues, churchgoers, patients, adults, children, his own brothers and sisters… _everyone_ saw Mike as a role model because it was so clear that he had his eyes fixed on the prize. Mike’s sense of humor, disarming charm, and drive for life-long learning and leadership was so admirable that people couldn’t help but respect Mike and want to be around him.

With perspective, we’ve realized that even his death was one of grace that he had hoped for. (well, as much as one can hope for their death.) After seeing his own Mother wither away slowly from Alzheimer’s, Mike prayed daily for her soul but also that God would grant him a swift death- He prayed the Rosary daily, asking Mary to “pray for us sinners, now and at the hour of our death.” It’s clear now that the manner of his passing was as fast and pain-free as one could hope for. This wasn’t a long and drawn out suffering. Mike slipped away only moments after closing the door and cutting the lights of his office on his way to evening Mass.

That same perspective showed us in less than a year after his passing how many bonds have tightened in his absence. We saw in 2017 how people in Mike’s life came together, worked together, grew in their faith, healed OLD relationship wounds, and unified in the peace that Mike worked for in his own life.

Personally, the perspective of his loss reminds me of gratitude. I will always be grateful for the 13 years I had with Mike. What started as a broken tooth emergency turned into an amazing friendship and mentorship that I’ll never forget. And 11 years ago, he gauged my interest in meeting his daughter Molly. We began a relationship that blessed me with a wife and three beautiful children. I see their blue eyes and see Mike’s goodness in them so vividly.

So when I played the video this morning, finally ready to watch it, I got a haunting new perspective when I heard the most amazing thing- the song playing in the background. We’ve mourned Mike’s loss every day and the sting is weaker but the loss is the same. It’s sad. We can be happy he’s in Heaven but it’s still just plain sad. The vitality he brought to other’s lives… that music… just went silent one day in February.

With this perspective and context a year later, watching the video of our girls working on Mike’s portrait last year as Mike was likely saying his final prayers and the paramedics (and his own son) were scrambling to perform chest compressions…it’s just surreal. This music playing in the background was a song that Mike sang all the time in his office. He loved it. Sometime’s he’d whistle it. Sometimes he would add new playful lyrics to annoy his team. 🙂 But with this new perspective 365 days after Mike’s passing, the song has an entirely new meaning.