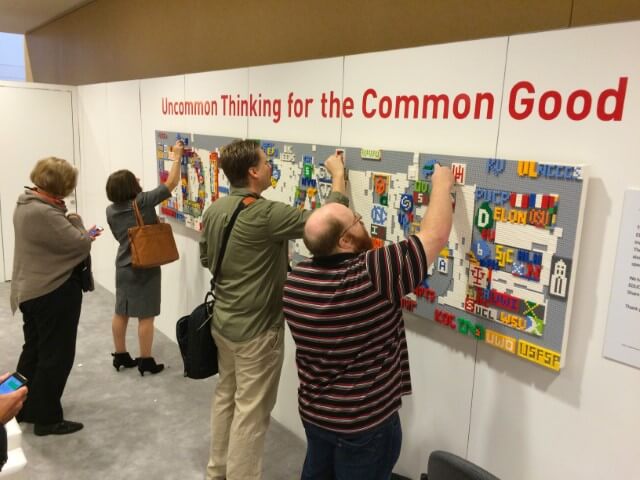 More than 7,000 attendees participated in this Brickworkz mosaic build for EDUCAUSE in Indianapolis. Brickworkz was brought in to design, plan, and facilitate the group build, along with six other pre-built infographic-style mosaics. Here’s how Brickworkz made it happen:

EDUCAUSE is an organization that benefits the IT community, specifically those in higher education. Each year, they provide multiple conferences for their members. EDUCAUSE 2015 was held in Indianapolis, Indiana. They chose a LEGO theme to represent the EDUCAUSE community because of the building, connecting, and creating involved in IT and the profound impact IT has on higher education.

“Thanks so much, Brian! We were so happy with how everything turned out.”

The Event marketing team at EDUCAUSE reached out to Brickworkz to coordinate plans for their event space, which was a combination of pre-built Lego mosaic art for display and a facilitated group build of a large logo made entirely with LEGO elements. “The bricks signify not only individual creativity and contributions but also characteristics that define our field: interoperability, standards, openness, and agility,” Marketing Manager Cathy Hafkus said.

Because of the data-heavy side of the research elements of the mission of EDUCAUSE, we wanted to find a way to showcase the extensive data that EDUCAUSE uses without being overwhelming, while also tying into the LEGO theme of the conference. Our solution was to make several infographics based on the data, designed as Lego mosaics for display at the trade show. These six LEGO mosaics supported were fun and different, and made almost an art-gallery effect within their booth space.

In all, the participants of EDUCAUSE 2015 reported that this was the most fun of all the exhibits, as it was “informative” and “highly engaging,” two descriptions that event marketers LOVE to hear. We couldn’t have been more thrilled with the outcome.

High engagement, fun, collaborative, and something different for your event or trade show: This is where your brand can shine with Brickworkz! Contact a brick artist today to see how we can help at your LEGO-themed event! If you and your team want to engage a crowd in a fun and memorable way, reach out to us!