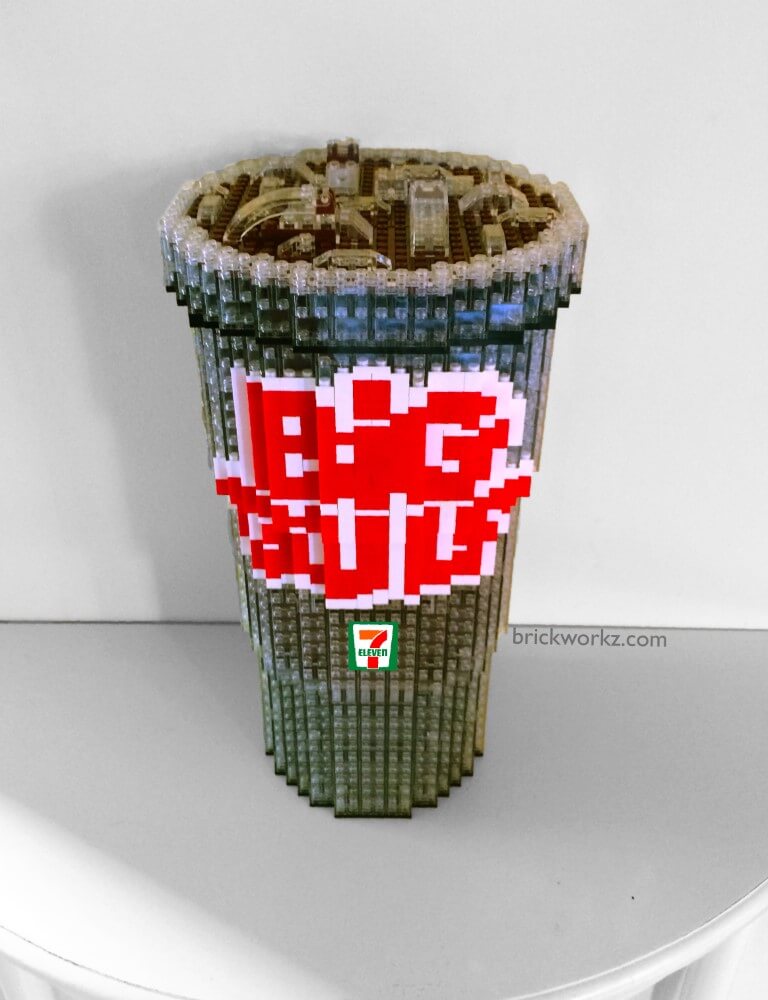 Coca-Cola hired event marketers to create a LEGO-themed display for a partnership project with 7-Eleven. The 7-Eleven Experience is an annual conference for franchisees and owners of 7-Eleven to network, celebrate their achievements, and find out what 7-Eleven has in store for the future. They found Brickworkz and asked if we could create several colorful and fun LEGO sculptures for the event.

Our goal was to create a life-sized (or larger-than-life) LEGO sculpture of a Coca-Cola Big Gulp. We received the artwork and went to a local 7-Eleven for some samples of the Big Gulp cup to get some real measurements and study the angles of the shape.

Looks amazing! The booth was well received by the management team here! Thank you for your part in making this booth happen!

The shape of the cup was determined with 3D modeling software to ensure that the gentle slope would be right. This also gave me idea of the LEGO brick height that the final sculpture would be. Everything else was designed by hand so I could create a strong and sturdy LEGO sculpture. The challenge was to make the piece structurally-sound and support its own weight.

As the build began, I worked with multiple LEGO parts of all sizes and shapes to create the general shape of the sculpture. And as I went, I had to continually rotate the piece to maintain the surface integrity while also keeping the piece sturdy as it grew. Coca-Cola has caramel coloring to make it sort of a dark brown color, but when inside the translucent-white or clear Big Gulp cup, the color appears much darker. I went with a black color and used transparent LEGO bricks on the surface to simulate the look. The additional benefit was that the visible tubes within the transparent bricks made it look like carbonation was bubbling to the surface. This let me achieve a fizzy appearance while also functioning to look like the plastic of the cup.

A challenge for this build was that the Big Gulp logo, located on both sides of the cup, was a crucial part of the design. I designed a LEGO mosaic and as I built the sculpture, I worked to apply the mosaic pattern as the sculpture was erected. So essentially this was a LEGO mosaic on a LEGO sculpture. A challenge, to be sure!

The original marketing art I received included ice cubes floating out of the top. I thought it would be a neat simulation to use transparent LEGO slopes and windshield pieces as the “ice.”

The final step was to apply the bubble graphics. Too small for a LEGO stud to simulate, this would need to be a decal. I scanned the actual Big Gulp cup and scaled it to the size of my sculpture. A local graphic designer printed the bubbles onto a special sticky thermal paper that would cling to the sculpture when heat was applied. Using the real Big Gulp cup as a model, I applied the decals to match and we were all set- A LEGO Coca-Cola Big Gulp.

Photos were taken of the sculpture, then it was safely wrapped and padded and quickly shipped to Las Vegas for the 7-Eleven Experience event. If we can create something unique and fun for your event, reach out to us!